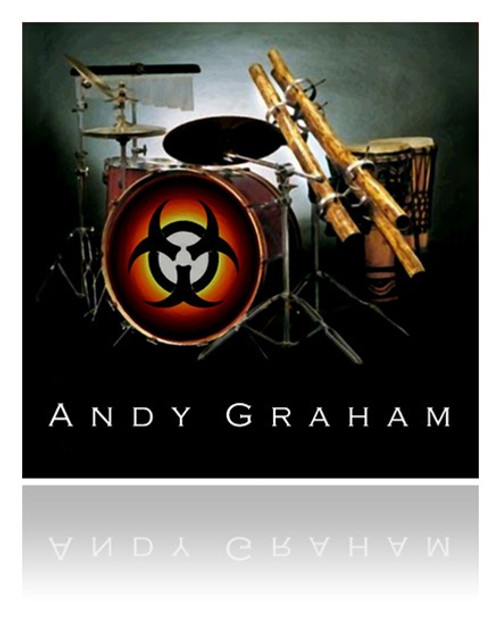 Andy Graham is based in the USA and has played drums for various rock and funk projects since the early 80s. Drummers such as Neil Peart, Stewart Copeland, Phil Gould, and Ian Mosely helped shape his style of drum kit playing.

In 1992, he was introduced, via Mickey Hart's Planet Drum, to the world of hand percussion. This new influence greatly enhanced his approach to drum playing and rhythm in general. Andy has become known over the last several years for is his live solo shows he began in 1998 after learning to play the aboriginal didgeridoo.

During these unique performances, Andy creates high-energy World music by playing drums and the didgeridoo...at the same time. He accomplishes this feat using a custom-built Didgeridoo Drum Kit which was featured in the June 2003 issue of Modern Drummer (The second time one of his custom drum kits have been featured in the national magazine). This drum kit features African drums, percussion, and his one-of-a-kind 'triple didge rack', custom fabricated by Andy himself. This rack holds 3 didgeridoos in exactly the right position on his kit, so that they can be played without holding them, keeping both hands free to play drums.

Andy released an instrumental CD, Primal Elements in 1999. This recording features World drums and percussion combined with drum kit grooves backed by the his rhythmic didgeridoo playing. Andy is continuing with various recording projects, solo performances, and inventing more unusual instruments. He is also looking to take his solo act to television audiences and other media.