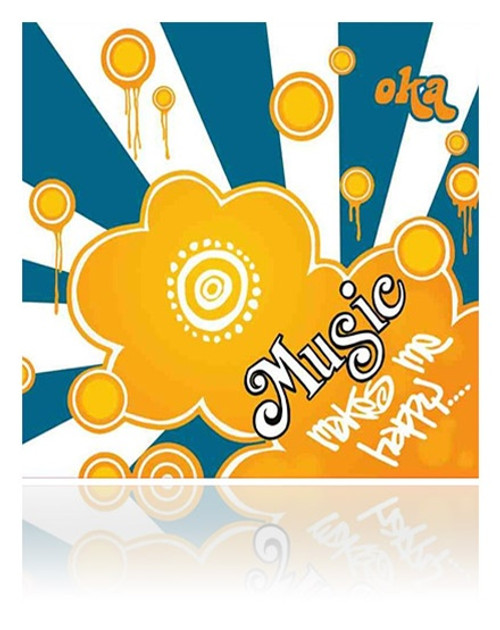 OKA's music brings musical traditions and cultures together - ancient and modern - black and white. The traditional rhythms and stories of DidgeriSTU's Yadaki (didgeridoo) weave throughout pumping electronic beats, vocals, exotic woodwinds and percussion - a unique fusion of organic world sounds and electronic music like no other. Australian band Oka have been together since 2002 and their music has progressed as quickly as their grass roots following. In 2002 they started out with their debut album 'Elements', a soulfully rhythmic ode to chilled beats and luscious melodies overlaying the Yidaki (didgeridoo) at its heart. Then in 2003 they followed it up with 'One Talk', a more eclectic album traditionally and progressively. Now they're touring on the back of their funkiest LP, 'Music Makes Me Happy'. Since its release Music Makes Me Happy has become the punters choice. Tested on their tours of Canada including The MONTREAL JAZZ FEST 2007, it's now seeing Triple J airplay, Rage coverage and a groundswell of Australian support on the back of a successful summer festival stint including, Bellingen Global Carnival, Surfing The Coldstream, Woodford Folk Festival and Exodus. MMMH has its roots on the road. Recorded and mixed in various locales around their Sunshine Coast base, the guys went where it felt right. This included Stu's Island Time Gallery or his home studio and the back of Chris' Kombi camper, overlooking various surf breaks. The final mix done while watching the waves of the Pacific hit the coast. DidgeriStu, Matt Aitchison and Chris Lane are Oka. Stu brings to the mix his Islander Aboriginal culture, the Yidaki, and his love of decks and beats, Matt, his passion for drumming and nightclub keys and Chris his Eastern travels, flutes, sax and slide guitar. The fusion created pushes musical boundaries, and what happens on the night will rock your body and move your soul for sure. Look out for them on the road this year around Australia.


Thank you for supporting independent artists